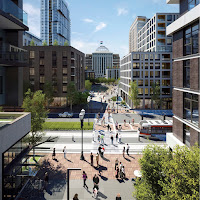 The Portland Design Commission recently approved plans for 944 units near Lloyd Center known officially as Oregon Square. The project involves four buildings ranging from 11-30 floors in height. Plans call for 708 parking spaces with an additional 200 parking spaces for retail customers, along with 1,647 stalls for bicycles. Read more about the design and details of this development.

Meanwhile, in response to plans by the Lloyd Center/Cypress Equities and southern California developer Bob Bisno, Regal Cinemas has filed suit. Regal claims its lease is good for another 11 years and does not want to give up its existing building and associated parking, which brings in $6.3 million in annual revenue. Cypress Equities and Bisno had announced plans to develop 980 apartment units with retail and parking for 873 cars.