Stark Street Station was the newest property in a large portfolio of assets. This gated community features a balanced unit mix of one- and two-bedroom apartments.

The City of Tacoma has passed a new ordinance requiring landlords to provide information and notices when conducting renovations.

HFO is pleased to announce the sale of the Metropolitan North Apartments. This asset features an attractive unit mix with a strong north Portland location. Metropolitan North was extensively renovated prior to sale with a complete envelope replacement. The historical operations challenged many investors with its high vacancy and expenses resulting from the renovations. HFO positioned the property as an exceptional opportunity to purchase a newly renovated asset with additional management upside.
Posted by HFO Investment Real Estate at Tuesday, November 27, 2018 No comments: Links to this post
Email ThisBlogThis!Share to TwitterShare to FacebookShare to Pinterest
Labels: Sold Listing
Location: Portland, Ore. Portland, OR, USA 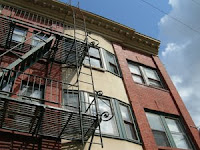 Portland attorney John DiLorenzo has sent the City of Portland a letter warning that a group of owners of unreinforced masonry buildings in Portland plans to sue the city over its recent adoption of an ordinance requiring warning placards on buildings. The article contains a link to the actual letter mailed to Mayor Ted Wheeler. Read more.
Posted by HFO Investment Real Estate at Monday, November 26, 2018 No comments: Links to this post
Email ThisBlogThis!Share to TwitterShare to FacebookShare to Pinterest
Labels: #cityofportland, #unreinforcedmasonry, City of Portland, Portland City Council, unreinforced masonry
Location: Portland, Ore. Portland, OR, USA

Angie Even of Save Portland Buildings offers a recap and update on the status of the City of Portland's regulations on unreinforced masonry buildings inside the city limits of Portland.

HFO is pleased to announce the sale of The Blake in Spokane Valley. This newer construction asset was completed in two phases of 48-units each in 2014 and 2018. The property features an attractive unit mix and apartments averaging nearly 1,000 square feet.

The Blake was placed under contract off-market and was an exchange for the buyer. The newest phase of the property was under lease-up during escrow and operations were not fully stabilized as a result. These unstabilized operations challenged the property’s ability to place new debt. HFO worked with the management company and seller to help the lender achieve maximum value.
Posted by HFO Investment Real Estate at Wednesday, November 21, 2018 No comments: Links to this post
Email ThisBlogThis!Share to TwitterShare to FacebookShare to Pinterest
Labels: Sold Listing, transactions
Location: Portland, Ore. Spokane Valley, WA, USA

This week: Oregon economists are predicting that the state's economic growth will start to slow over the next two years, but do not anticipate a recession; local transportation advocacy groups are supportive of Portland's Central City in Motion plan, but have expressed concerns over a recently released parking loss mitigation strategy; and a new report in the Journal of Planning Education and Research finds that Millennial first-time home buyers are more likely to purchase homes near city centers than their Gen-X peers.

HFO is pleased to announce the sale of Madison @ Sellwood. This mixed-use building was completed in 2014 and includes three fully-leased ground-floor retail spaces and 21 apartments. A unique feature of the property is the spacious two-bed two-bath units with large decks and in-unit washer/dryer. Madison at Sellwood is located in the heart of the popular Sellwood neighborhood, a few blocks from New Seasons market.

Tribune Podcast: 147-Unit Broadstone Reveal Apartments in the Pearl Get Their Close-Up in Preparation for Opening

The Portland Business Tribune goes behind the scenes to discuss the final days in preparation for opening of the Broadstone Reveal apartments in the Pearl. The 147-unit property anticipates opening in just a couple of weeks.

This week: historic midterm elections bring Democratic supermajorities to both chambers of the Oregon legislature and deepen the urban-rural divide in Washington; Portland, Tualatin, and Tigard are working on a plan to upzone land near the proposed Southwest Corridor MAX line; and the LA Times reports on the growing income inequality between landlords and renters.

Angie Even of Save Portland Buildings offers a recap and update on the status of the City of Portland's regulations on unreinforced masonry buildings in the city limits of Portland.

OR Election Results: Supermajorities in the State Legislature, Hardesty on City Council

Democrats and Progressives won races across the state of Oregon, resulting in the re-election of Kate Brown, Democratic supermajorities in both chambers of the Oregon legislature, and the election of Jo Ann Hardesty as the first black woman on Portland's City Council.

While ballot measure 104, which would have required a 3/5 vote in each chamber in order to enact new tax increases, got only 33% of the vote, the new Democratic supermajorities in the house and senate will facilitate the passage of more progressive legislation at the state level, including revenue raising actions.

School bond measures were passed in Oregon City, North Clackamas, and Tigard-Tualatin. Metro-area voters also passed the $653 million affordable housing bond by a wide margin, with statewide voters enabling the bond to provide up to 3,900 homes through the passage of Measure 102.

In August, the Portland Tribune reported that the $790 million PPS bond approved by district voters is unlikely to cover the costs of the planned school renovations. According to the Tribune, professional cost estimator Rider Levett Bucknall (RLB) had projected the costs were likely to end up between $894.7 million and $1.06 billion. School board chair Rita Moore says she does not know why the district informed voters that it would cost $790 million, but in January 2017 a poll found that a majority of voters would support a school bond measure priced between $750 and $850 million. Read more.
Posted by Jennifer Shuch at Monday, November 05, 2018 No comments: Links to this post
Email ThisBlogThis!Share to TwitterShare to FacebookShare to Pinterest
Labels: #bond, #oregon, #Portland, #school, #taxes
Location: Portland, Ore. Portland, OR, USA

The U.S. Census Bureau reports that third quarter 2018 rental vacancy rate for the Portland/Vancouver/Hillsboro metro area was 4.5%, a decrease of 1.7% from a year earlier.

Seattle/Tacoma/Bellevue's metro area vacancy rate was listed at 5.5%, up from 3.6% a year earlier.

The average national rental vacancy rate for Q3 2018 was 7.1 percent for multifamily dwellings of five or more units -- 0.4% lower than one year earlier, despite ongoing delivery of multifamily units throughout the national market.

This week: Houses in Seattle are selling below asking price for the first time in four years; a new Harvard study finds that the number of low-income renters is growing significantly faster than the number of affordable housing units; and economist Joe Cortright explains why housing can either be a good investment, or affordable -- but it can't be both.

The DJC published an article today that looks at how many Inclusionary Housing units are actually likely to be built in Portland. Since February 2017, 8,758 units have entered the city's permitting pipeline, but it is unlikely that all of these units will actually get built. Two projects by Urban Asset Advisors should receive building permits soon, and may be the first market rate projects built with inclusionary units. But a provision introduced by former city Commissioner Steve Novick allows developers to count bedrooms rather than units when calculating the affordability requirement. At the 39-unit Multnomah Station apartments, one three bedroom unit will be affordable at 60% AMI, satisfying the inclusionary housing requirement. Urban Asset Advisors President Tim O'Brien said he believes the slowdown in multifamily construction will result in another housing shortage in about two years. Read more.
Posted by Jennifer Shuch at Friday, November 02, 2018 No comments: Links to this post
Email ThisBlogThis!Share to TwitterShare to FacebookShare to Pinterest
Labels: #affordablehousing, #development, #housingshortage, #inclusionaryzoning, #multifamily, #oregon, #Portland
Location: Portland, Ore. Portland, OR, USA
Newer Posts Older Posts Home
Subscribe to: Posts (Atom)