The Portland Tribune reports that Josh Lehner of the Oregon Office of Economic Analysis is forecasting that we are currently at "peak renter." He expects that as millennials enter their mid- to late-thirties, homeownership rates will increase. Since the recession, however, far fewer single family homes have been built both locally and nationally. The resulting shortage of owner-occupied housing units has been driving up prices, making many homes unaffordable for first time buyers. Portland's population is also expected to increase by 35,000 people each year, which will continue to drive apartment demand for the foreseeable future. Read more.
Posted by Jennifer Shuch at Thursday, April 27, 2017 No comments:
Labels: #housingshortage, #multifamily, #oregon, #Portland
Location: Portland, Ore. Portland, OR, USA

The announcement Monday night of a new set of tariffs on Canadian softwood lumber imports has resulted in falling stock prices for large homebuilders in the U.S., and concern among industry experts that building costs will increase sharply. Granger MacDonald of The National Association of Homebuilders (NAHB) told The Hill that NAHB is "deeply disappointed" and that the new tariffs will "negatively harm American consumers and housing affordability." Approximately 95% of lumber imports to the U.S. came from Canada last year, and lumber costs account for approximately 8-12% of the price of a new home. Read more.
Posted by Jennifer Shuch at Tuesday, April 25, 2017 No comments:
Labels: #construction, #housingshortage, #multifamily
Location: Portland, Ore. Portland, OR, USA

According to the Daily Journal of Commerce, Urban Development + Partners is the first company to pay relocation fees to tenants as a result of a new city ordinance aimed at discouraging no-cause evictions. UD+P purchased the Fairmount Hotel in NW Portland with the aim of renovating it, but decided to let tenants stay until construction began. To issue no-cause evictions to 65 units, the company paid $199,800. UD+P had planned from the outset to offer relocation assistance to existing tenants, though not as much as the $2,900-$4,500 required by the new law. According to principal Eric Cress, most tenants were able to quickly find a new place to live. After it is rehabilitated, the Fairmount will have 80 units, a new roof, and modernized electrical and plumbing systems. Read more.
Posted by Jennifer Shuch at Thursday, April 20, 2017 No comments:
Labels: #landlordandenantlaws, #oregon, #Portland, #relocationfee
Location: Portland, Ore. Portland, OR, USA

The Portland Tribune sat down with developer and landlord Tom Brenneke of Guardian Real Estate Services to discuss his resignation from the Portland Housing Advisory Committee, as well as his views on the state of housing in the City of Portland. Brenneke expressed frustration with a system that delays rather than expedites the delivery of new, much needed housing in the city. He also stated that the Housing Bureau and City Council rarely asked the Housing Advisory Committee to weigh in on relevant issues, including the Housing State of Emergency and inclusionary zoning. On the issue of development, Brenneke is frustrated by delays caused by neighborhood associations, the Portland Design Commission, and the Historic Landmark Commission. He believes projects go more smoothly when more specific community design standards apply, as they are much easier to understand and meet. Guardian Real Estate Services recently opened NAYA Generations in Lents, which will place foster children with grandparents in a cooperative setting run by the Native American Youth and Family Center. Read more.
Posted by Jennifer Shuch at Thursday, April 20, 2017 No comments:
Labels: #affordablehousing, #development, #multifamily, #oregon, #Portland
Location: Portland, Ore. Portland, OR, USA 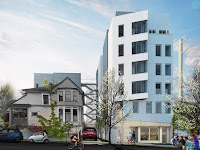 Half a block East of the 5-way intersection of SE Ankeny, Sandy, and 11th, an empty and unused plot of land could become something unique.

The developer, Landon Crowell, has worked with YGH Architecture to design a unique 6 story structure with photovoltaic panels, triple pane passive house windows, and highly insulated walls and roof - the kind of forward-thinking structure Portland should be proud of. And yet, the plot of land still sits empty, despite the fact that discussions with the city started 16 months ago -- in January 2016.

The project went before the design commission five times between October 2016 and February 2017. During the hearings, Crowell agreed to reduce the size of the building by 8%, from 26 units to 18. At the third hearing on January 5, 2017, a staff report and recommendation to the Design Commission recommended that the project be approved. However the Design Commission felt it did not meet "subjective" criteria, despite meeting the standards required by the Portland Zoning Code.

The decision was appealed to the City Council, with a hearing scheduled for April 5th. The council delayed the hearing until April 12th, with no publicly stated reason given for the further delay of a badly needed housing project in a centrally located, transit-heavy neighborhood.

At the meeting on April 12, it became clear that nearby neighbors are the biggest roadblock. One neighbor, William Phillips, is quoted as saying the project is a "monstrosity." Priscilla Sturges, a resident who has lived in her house for over 40 years claims the project amounts to "elder abuse" because, in her opinion, the development will only serve "wealthy short-termers." In response to complaints from residents, Bob Zimmerman of YGH pointed out that the parcel is zoned EXd, and there is barely any residential housing in the neighborhood. After three hours of testimony on a 17-unit project, it was determined that a final decision will be delayed until May 11, 2017.

According to the Portland Tribune, Amanda Fritz was prepared to vote against the project, while Commissioners Fish and Eudaly were undecided (Commissioner Saltzman was absent). These are the same commissioners who have:

Developers have continuously pointed out that needless delays and extended timelines for the design review process adds significant expense, preventing delivery of units at the lowest cost possible (and hence the lowest rents possible). In this case, the developer has had to pay $160,000 in additional city fees -- $9,411 per unit -- through the end of March.

In the End -- More Delay May Mean More Units, Even Unhappier Neighbors
Ironically, Landon Crowell has the option of holding off until next year in order to apply to  build a significantly larger structure in the exact same spot when new comprehensive plan takes effect and raises the parcel's height limit from 75 to 125 feet.

In this episode: the release of Multifamily Northwest's apartment report for greater Portland; a surge in the number of homes for sale in Portland, and the Portland Tribune weights in on pending rent control legislation.

The Portland Tribune editorial board opined this past week that after hosting a 90-minute discussion with renters and landlords it was clear that elected leaders need to get both sides to the table to craft a better solution than HB 2004-A which was adopted by the house earlier this month. "Talking -- and listening -- to landlords who disagree with their proposal will make for better policy." Read the editorial.

At the close of each brokered apartment sale, HFO makes a contribution in honor of the client(s) represented to a charity of their choosing. In addition to the thousands of dollars distributed in this manner each year, HFO matches those contributions in a separate account from which it makes several additional larger year-end contributions.

This year, the HFO team felt strongly about focusing its charitable dollars on nonprofits serving families and children with affordable housing. HFO's distributions from its 2016 charity account were as follows (includes year-end 2017 contributions):

“Each of us at HFO thoroughly understands the dynamics behind increasing rents. No one is more aware of the market influences at play. We call on our elected leaders to take whatever steps necessary to encourage the development of additional affordable housing in our community," said marketing director Aaron Kirk Douglas. "Economists agree: trying to micromanage the local rental market through rent control is not the answer."

In this episode: status of Oregon House Bill 2004-A allowing rent control, Portland's new committee oversight on affordable housing, and a new 220-unit apartment building slated for the South side of the Burnside Bridgehead.

As you may be aware, the City of Portland is planning to adopt mandatory seismic upgrades for unreinforced masonry (URM) buildings.

The final meeting of the URM Building Policy Committee is Wednesday, April 19th, from 3-5 PM at CH2M Hill, 2020 SW 4th Ave, Portland, OR 97201.
Failure to comply with the new ordinance would result in stiff fines and, ultimately, the revocation of a building’s occupancy permit. If you own an URM Building and did not receive our email blast with additional information, please contact our offices at (503) 241-5541 or email service@hfore.com.
Posted by HFO Investment Real Estate at Tuesday, April 11, 2017 No comments:

This spring, the Seattle City Council created a renters' commission that will begin meeting this summer to talk about pushing laws to cope with numerous things including soaring rents, displacement, zoning, transportation and access to open space. The City announced that members will be appointed by the council and mayor and will consist of people living in an array of rental housing types including students, low-income renters, LGBTQ renters, people with past felony convictions and those living in subsidized housing. Read more.

Attorney John DiLorenzo argued on Thursday that Portland's new tenant protection rule is illegal under Oregon's ban on rent control, and that the rule violates a statute in Oregon's Constitution that prohibits passing laws that change existing contracts. Judge Henry Breithaupt questioned whether the relocation fee constituted a form of rent control, asking if landlords truly cannot raise rents. DiLorenzo has stated that he will not withdraw his suit if the rent control ban is overturned by the Oregon Legislature. Similarly, Judge Breithaupt does not plan to dismiss the case if Oregon's housing rules change. City Commissioner Chloe Eudaly spent Thursday lobbying lawmakers in Salem to repeal the rent control ban. Her office has stated that if the ban gets repealed, she will begin working to create a rent stabilization policy in Portland. Read more.
Posted by Jennifer Shuch at Friday, April 07, 2017 No comments:
Labels: #cityofportland, #landlordandenantlaws, #oregon, #rentcontrol
Location: Portland, Ore. Portland, OR, USA

House Bill 2004 passed the Oregon House of Representatives 31-27 on Tuesday. The bill does not establish any specific rent control policies, but would allow local municipalities to enact rent ceilings. It also bans landlords who rent more than four units from issuing no-cause evictions to month-to-month tenants after their first 6 months of renting. Rep. Bill Kennemer of Oregon City described the bill as "well-intentioned" but also noted that it "does not build a single apartment unit." It will now go to the Senate, where it is expected to get a hearing. Read more.
Posted by Jennifer Shuch at Wednesday, April 05, 2017 No comments:
Labels: #evictions, #nocause, #rentcontrol, #StateofOregon
Location: Portland, Ore. Portland, OR, USA

The Willamette Week reported over the weekend that according to the Oregon Office of Economic Analysis, a lack of new housing construction has been a major contributor to rising housing costs in the Portland Metro Area. Since 2006, the ratio of housing permits per population change has remained below the 1980-2004 average almost every year. The article notes that at the high end, rents are beginning to come down as new developments come online. At the lower end of the market, however, both renters and aspiring homeowners are feeling the effects of building trends that have not kept up with population growth. Read more.
Posted by Jennifer Shuch at Monday, April 03, 2017 No comments:
Labels: #construction, #housingshortage, #multifamily, #oregon, #Portland
Location: Portland, Ore. Portland, OR, USA
Newer Posts Older Posts Home
Subscribe to: Posts (Atom)