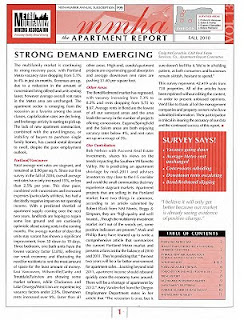 The Metro Multifamily Housing Association (MMHA) has released its fall 2010 report that includes rent survey data for Portland/Vancouver metro area along with Salem, Eugene/Springfield and Bend/Redmond.  It also includes the latest vacancy rate data and detailed neighborhood by neighborhood rent breakdowns for the Portland metro area.

HFO encourages apartment owners and investors in Oregon and SW Washington to become active members of the MMHA! Learn more about the many features and benefits of becoming an MMHA member at http://www.metromultifamily.com/about/
Posted by HFO Investment Real Estate at Monday, October 25, 2010 No comments: Links to this post
Email ThisBlogThis!Share to TwitterShare to FacebookShare to Pinterest
Labels: Bend/Redmond, cap rates, Concessions, eugene/springfield, rent surveys, Salem, vacancy rates

Looking back on three consecutive quarters of improving fundamentals, researchers say the multifamily market hit the bottom of the cycle in the fourth quarter of 2009 and is leading the commercial property sectors in recovery. Apartment prices bottomed out in the third quarter of 2009 and have been climbing since the fourth quarter, according to the Moody’s/REAL Commercial Property Price Indices. Read More at the National Real Estate Investor.
Posted by HFO Investment Real Estate at Monday, October 25, 2010 No comments: Links to this post
Email ThisBlogThis!Share to TwitterShare to FacebookShare to Pinterest
Labels: National trends

Forbes Magazine has ranked Oregon among the top states for business and careers.  This year Oregon ranked sixth, up from #10 last year.  The study is based on six categories: costs, labor supply, regulatory environment, current economic climate, growth prospects and quality of life.  Oregon ranked No. 4 for labor supply, No. 12 for growth prospects, No. 18 for business costs, No. 14 for economic climate, No. 21 for quality of life and No. 34 for regulatory environment. Click here to see the full list.
Posted by HFO Investment Real Estate at Wednesday, October 20, 2010 No comments: Links to this post
Email ThisBlogThis!Share to TwitterShare to FacebookShare to Pinterest

HFO Announces $10.625 million Sale of 132-Unit Apartment Complex in Clackamas, OR and Results of Apartment Investor Survey - CNBC
Posted by HFO Investment Real Estate at Wednesday, October 20, 2010 No comments: Links to this post
Email ThisBlogThis!Share to TwitterShare to FacebookShare to Pinterest

Intel to Invest Billions in Oregon, Creating Thousands of Jobs

Speculation over a massive investment in Oregon by Intel ended yesterday with the company's announcement that it would spend $6-$8 billion in the state.  More from The Oregonian.
Posted by HFO Investment Real Estate at Wednesday, October 20, 2010 No comments: Links to this post
Email ThisBlogThis!Share to TwitterShare to FacebookShare to Pinterest
Labels: Oregon economy

At the annual Multifamily Executive Conference held in Las Vegas last week, the closing keynote speaker was former U.S. Department of Housing and Urban Development Secretary Henry Cisneros.  He offered up his insights -- drawing heavily on his current experience as chairman of CityView, a Los Angeles-based developer of affordable housing currently raising money to acquire and redevelop multifamily housing in the Southwest, the Bay Area, D.C., and the Boston-New York corridor.

Among other things Cisneros said:
Cisneros ended his remarks by adding: "There's work out there to be done, and it's time for those who are able to move to take action. There will be great rewards for those first-movers."

Read more on the conference, where optimism abounded this year, online at Multifamily Executive.
Posted by HFO Investment Real Estate at Wednesday, October 20, 2010 No comments: Links to this post
Email ThisBlogThis!Share to TwitterShare to FacebookShare to Pinterest

Last week was an upbeat one in Las Vegas as apartment owners were bullish on apartment futures.  “I don’t recall a time in the last 40 years that I’ve been more optimistic about our prospects over the next several years,” said industry veteran Steve Bell, CEO of Bell Partners, which has a $5 billion portfolio that includes market-rate and seniors apartments. Read more at Multifamily Executive Magazine.
Posted by HFO Investment Real Estate at Monday, October 18, 2010 No comments: Links to this post
Email ThisBlogThis!Share to TwitterShare to FacebookShare to Pinterest
Labels: apartment market trends, National trends

The Glenn Featured in Today's Daily Journal of Commerce

An apartment complex in Portland’s Hawthorne neighborhood recently went up for sale. The Glenn, at 3268 S.E. Hawthorne Blvd., is a 95-year-old vintage building with modern amenities. Located in a hip Southeast Portland area, it’s a rare type of building to be on the market. “It’s on the 50-yard line of Hawthorne,” said broker Gregory Frick with Hagerman Frick O’Brien. Read more about The Glenn in today's Daily Journal of Commerce > > >
Posted by HFO Investment Real Estate at Thursday, October 07, 2010 No comments: Links to this post
Email ThisBlogThis!Share to TwitterShare to FacebookShare to Pinterest
Labels: apartment listing, SE Portland

The U.S. apartment market recovery was in full swing in the third quarter as vacancies dropped sharply and rents increased because tenants signed leases in belief they would shortly find jobs.

ForRent.com and its affiliate sites (including CorporateHousing.com and SeniorOutlook.com) report a 65 percent increase in traffic during August 2010 compared with the same month in 2009, according to the company, which specializes in providing information to apartment seekers. This finding matches other recent reports that indicate demand for apartments is increasing nationwide. Read More at Multi-Housing News > > >
Posted by HFO Investment Real Estate at Wednesday, October 06, 2010 No comments: Links to this post
Email ThisBlogThis!Share to TwitterShare to FacebookShare to Pinterest
Labels: vacancy rates
Newer Posts Older Posts Home
Subscribe to: Posts (Atom)