This week: Want to live in the nation's best place for business and careers in 2017? If you live in Portland, Forbes says to stay put; more "for rent" signs are cropping up on lawns these days and the Washington Post says affordable housing stock has dropped 60% since 2010. 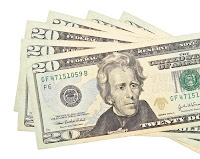 Although the City Council recently approved its policy for how to spend money generated by the $258 million affordable housing bond, it is unlikely to receive any proposals from the Portland Housing Bureau until March of 2018, almost a full year and a half after voters approved the bond measure. Although the PHB has generated support for a turn-key pilot program that would allow developers to build projects and sell them to the city, it is currently soliciting proposals for land where it can build affordable units, as well as existing properties. Proposals will be vetted by Kurt Creager, Director of the PHB, and Mayor Wheeler before being presented to the City Council. Between its purchase of the Ellington Apartments and administration costs, the City Council now has approximately $205 million left to spend on housing. Read more.
Posted by Jennifer Shuch at Tuesday, October 31, 2017 No comments: Links to this post
Email ThisBlogThis!Share to TwitterShare to FacebookShare to Pinterest
Labels: #affordablehousing, #housingshortage, #oregon, #Portland
Location: Portland, Ore. Portland, OR, USA

Portland Ranked Best Place for Business and Careers in 2017

Forbes ranked Portland the #1 city in the country for business and careers in 2017, after ranking the city fifth last year. Portland's ascendance can be attributed to the large number of tech companies in the region as well as the highly educated workforce. The cities on the list were ranked on 14 metrics including job growth, business and living costs, income growth, quality of life, and labor force education. Portland finished in the top quartile for every metric except for business and living costs. Portland's household income has grown 4% annually since 2011, and unemployment in the city is below 4%. Read more.
Posted by Jennifer Shuch at Thursday, October 26, 2017 No comments: Links to this post
Email ThisBlogThis!Share to TwitterShare to FacebookShare to Pinterest
Labels: #income, #jobgrowth, #oregon, #Portland
Location: Portland, Ore. Portland, OR, USA

Washington county residents have been feeling the effects of the region's housing crunch, and county commissioners are looking at new sources of revenue to fund affordable housing. During a working session on Tuesday, the commissioners considered a construction excise tax and a special property tax levy as two likely options to raise the needed funds. Portland and Bend both have construction excise taxes, which are capped at 1% for residential construction. Public support for a countywide levy is only about 52%, though Board Chairman Andy Duyck thinks that outreach to city councils could improve a levy's chance of passing. Read more.
Posted by Jennifer Shuch at Wednesday, October 25, 2017 No comments: Links to this post
Email ThisBlogThis!Share to TwitterShare to FacebookShare to Pinterest
Labels: #affordablehousing, #construction, #housingshortage, #oregon, #taxes, #washingtoncounty
Location: Portland, Ore. Portland, OR, USA

This Week: Portland City Commissioner Chloe Eudaly stops strict enforcement of code restrictions against sleeping in RVs and tiny houses built on private property without a permit; Portland State University reports that wages in Portland are rising, and housing prices are increasing at a slower rate.

This week: a Portland Landlord slams Commissioner Eudaly for violating City of Portland social media policy and blocking him from her public Facebook page; the Portland Tribune reports that more than 15% of the cost of new apartment buildings comes from City of Portland fees and development charges.

At this morning's Multifamily NW Apartment Report Breakfast the overall fall 2017 vacancy rate for Greater Portland apartment properties was reported at 4.37%, up from 3.71% one year earlier. Here are year-over-year comparisons by submarket: 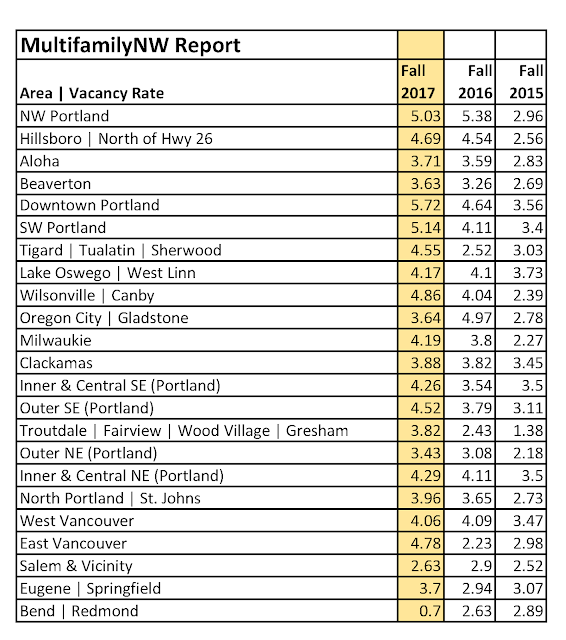 Portland landlord Nishant Bhajaria penned an op ed that appeared in this week's Sunday Oregonian. The piece was critical of Portland City Commissioner Commissioner Chloe Eudaly. Bhajara says when he posted on Eudaly's public Facebook page for evidence that rent control really worked, Eudaly deleted his posts and banned him from the page without explanation, in violation of the City's social media policy.

Bhajaria says it wasn't until he threatened the city attorney with a lawsuit that he was unblocked and allowed to comment. The opinion piece states that while Eudaly and mayor Ted Wheeler claim to embrace diversity, they met privately with "mostly white liberals" who had not registered as lobbyists, and that these groups were "allowed a seat at the table in almost every discussion around housing policy in Portland." Read more.

Bhajaria's previous Op-Ed in opposition to the ordinance requiring payment of relocation fees to renters appeared in the Oregonian on Sunday, February 25, 2017.
Posted by HFO Investment Real Estate at Monday, October 16, 2017 No comments: Links to this post
Email ThisBlogThis!Share to TwitterShare to FacebookShare to Pinterest

Oregonian Editorial Board: City Council Is Not Adequately Monitoring Effects of Housing Policies

The Oregonian Editorial Board published a statement yesterday afternoon faulting the Portland City Council for failing to examine the effects of its housing policies. The Board points out that the city has not done anything to track whether the relocation fee ordinance is working, and that the council has relied more on anecdotes than data. The Portland Association of Metropolitan Realtors estimates that 400 single-family properties that were previously used as rentals have been put on the market by owners since the relocation fee ordinance went into effect, but City Council members seem to be shrugging off the impacts of the tightening housing supply. The City Council's lack of reliable data on policy effects is due in part to a failure to establish Mayor Wheeler's promised Office of Landlord-Tenant Affairs, which was a central part of his campaign in 2016. The Board also acknowledges that most of the pain felt by renters is due to a shortage of thousands of housing units, and that many of the city's policies negatively impact the developers who could be building more housing units in the city. The city is reliant on private housing developers to solve the problem, but rising development costs associated with fees, demolition requirements, and zoning and FAR restrictions deter that investment. Read more.
Posted by Jennifer Shuch at Wednesday, October 11, 2017 No comments: Links to this post
Email ThisBlogThis!Share to TwitterShare to FacebookShare to Pinterest
Labels: #cityofportland, #development, #multifamily, #oregon, #Portland, #relocationfee
Location: Portland, Ore. Portland, OR, USA

This week: Chloe Eudaly's First Right of Refusal ordinance for renters would likely apply to all types of rental housing; Portland developers propose to build up to 2,500 units on Portland's waterfront, including 500 affordable units, in exchange for increased height limits.

Portland-Area Politicians Not Living Up to Promises on Addressing Homelessness

In 2015, Portland, Gresham, and Multnomah County officials created A Home for Everyone. They stated an ambitious goal of halving homelessness by 2019. During his campaign in 2016, Mayor Wheeler came out with his own ambitious goal - providing all Portlanders with a safe place to sleep by the end of 2018. He believed he could achieve this goal by getting the city and county to fund 1,800 new shelter beds. It is becoming clear, however, that metro-area elected officials are not living up to the promises they made. KGW-TV commissioned a poll on homelessness that found that 57% of Portlanders are dissatisfied with Wheeler and the City Council's response to homelessness in the city. 46% of residents are dissatisfied with Multnomah County Chair Deborah Kafoury's approach to handling problems associated with homelessness. Since 2015, the number of residents who lack permanent housing has increased from 3,801 to 4,177. Residents in East Portland who live in close proximity to the Springwater Corridor multi-use path argue that sweeps of homeless camps have only exacerbated problems in their neighborhoods. Wheeler believes that homelessness in the city is a symptom of a number of problems facing Portland as well as many other major cities. The nationwide housing shortage, the opioid crisis, a lack of mental health and addiction treatment, and unemployment all contribute to increasing homelessness in the city. Addressing homelessness is no easy task, but Portland residents seem to be losing patience with officials who are so far from achieving their own stated goals. 49% of residents surveyed said there are currently people living in tents in their neighborhoods, and public opinion may be turning against leaders who fail to adequately address the needs of housed and un-housed residents alike. Read more.
Posted by Jennifer Shuch at Tuesday, October 10, 2017 No comments: Links to this post
Email ThisBlogThis!Share to TwitterShare to FacebookShare to Pinterest
Labels: #cityofportland, #homelessness, #multnomahcounty, #oregon
Location: Portland, Ore. Portland, OR, USA

The City Council voted on Wednesday to extend the Housing State of Emergency by 18 months, and the Renter Relocation Fee Ordinance by 6 months. Mayor Wheeler announced that he plans to propose a permanent replacement for the temporary relocation fee requirements to the City Council by December 6th of this year. Commissioner Eudaly proposed eliminating the exemption to that ordinance for small landlords, but the other commissioners voted that proposal down. They are also considering a "hardship exemption" for some landlords. Renter advocates present at the meeting argued that their rent is going up in other ways, such as being asked to pay utilities. The commissioners plan to look into whether renter utility payments are increasing beyond what landlords are being charged for those services. In the coming weeks, the council will vote on spending guidelines for the affordable housing bond, as well as a pledge to create supportive housing units in the city. Read more.
Posted by Jennifer Shuch at Thursday, October 05, 2017 No comments: Links to this post
Email ThisBlogThis!Share to TwitterShare to FacebookShare to Pinterest
Labels: #housingshortage, #oregon, #Portland, #relocationfee
Location: Portland, Ore. Portland, OR, USA

The Daily Journal of Commerce published additional details on Commissioner Eudaly's proposal to give tenants the first right of refusal on the sale of rental units. Commissioner Eudaly's Policy Director, Jamey Duhamel, estimates that the proposal is likely to begin hearings in two to three months. It would apply to all types of rental housing, from single family homes to apartment complexes. A tenant or group of tenants would have 60 days to put together an offer, and if they do not do so, the city would have 30 days to submit an offer on the building. If the city declines to submit an offer, the seller would then be able to market the property openly. While Eudaly's office claims that the proposal is based on a similar law in Washington, DC, the DC law gives tenants an opportunity to make an offer that is competitive with any third party offers that have already been received within 45 days of being notified of a pending sale. It does not impose a 90 day delay on the marketing of a privately owned property. Read more.
Posted by Jennifer Shuch at Thursday, October 05, 2017 No comments: Links to this post
Email ThisBlogThis!Share to TwitterShare to FacebookShare to Pinterest
Labels: #apartmentsales, #cityofportland, #landlordandenantlaws, #oregon, #Portland
Location: Portland, Ore. Portland, OR, USA

This week: Portland Commissioner Chloe Eudaly wants to give tenants first right of refusal to buy apartment buildings before they hit the market, and Mayor Ted Wheeler to ask for an 18-month extension of Portland's housing emergency, this time requiring agencies to figure out when to end it.