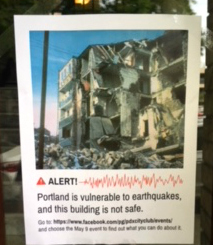 Volunteers for the City Club of Portland posted these flyers on unreinforced masonry (URM) buildings around town this past weekend. The headline reads "Portland is vulnerable to earthquakes, and this building is not safe." The flyer encourages residents to visit a City Club facebook page regarding the May 9th City Council hearing on a proposed unreinforced masonry policy.

Angie Even of the group Save Portland Buildings emailed URM owners this morning that the poster, which directs people to the Facebook page, was the work of the City Club itself and posted this personal letter in response:

To: Portland City Club, It's Officers, Administration and Members.

As the President of a Non-Profit in Portland, It is with outrage that I send this email to address the attachment of a fear mongering poster on private property today in Portland, Oregon.

City Club of Portland has taken a measured approach on their Facebook event that was advertised on the poster. The disconnect is the declaration that a building is unsafe. I am not an attorney, but defaming a building that is in current code compliance for political favor and gain is a breach of ethics that cannot be understated.

The subject is the upcoming resolution concerning URM building retrofits, costs, timelines and logistics. These are all complex conversations that are worthy to have and it is clear that the reputation of City Club has been stained by the outrageous act of trespass with propaganda with the purpose of inciting citizens.

Building owners are working with the city to remedy the pitfalls and financial burdens that mandated retrofits will bring. It is everyone's goal to work toward a more resilient city. This, among other things, is why this outrageous attempt to defame buildings and owners should not go unanswered by City Club of Portland.

The individuals that you pinned this propaganda on are your neighbors. They are the people who have invested in Portland to make it what it is. They have done City Club of Portland no harm and they are not the adversaries of the city or seismic retrofits.
They are, for the most part, Mom and Pop owners who are not sure how they will be able to afford one-quarter of a million dollars to just do roof retrofits to a 7,000 square foot roof. Yes, that is the cost, $250K and it is beyond many owners. Most of the owners are retired and their property is their retirement income.

To demonize these citizens who have done nothing wrong except bought a building, maintain it and build on their dream only to find out in 2016, 2017 and 2018 that their building is an acronym, URM, and that the city has not enforced their own code to alert owners of roof retrofit requirements. You see, we replaced the roof on our building in 2005 with a city-issued roof permit, ABC Roofing Co and city inspectors and no one told my husband and me anything.

Angie Even
Born in Portland in 1959

(Story updated 5/9/18 following admission of responsibility for the postings in an email from Dan Rivas, City Club Marketing and Communications Director, to Angie Even of Save Portland Buildings.) See that story here.
Posted by HFO Investment Real Estate at Monday, May 07, 2018
Email ThisBlogThis!Share to TwitterShare to FacebookShare to Pinterest
Labels: #unreinforcedmasonry, City of Portland, earthquake, unreinforced masonry