The City of Portland Bureau of Development Services has announced upcoming service and processing delays due to a transition in its software beginning February 10, 2020. Expect delays from the end of January through the end of February. Details are available at the BDS website here.
Posted by HFO Investment Real Estate at Thursday, January 30, 2020 No comments:

Governor Kate Brown is proposing an amendment to the Oregon Constitution that would establish a real estate transfer tax to fund affordable housing statewide. Measure 79, which was passed in 2012, prohibits such a tax - if the state legislature approves Brown's new bill, it will go to voters in the next election. While there are not many details yet on the tax structure or how much money the Governor hopes to raise, OPB reports that the first $500,000 of a property's value would be exempt. Read more.
Posted by Jennifer Shuch at Wednesday, January 29, 2020 No comments:
Labels: #oregon, #realestate, #salem, #taxes
Location: Portland, Ore. Portland, OR, USA

No hearing has been held or scheduled, but Washington State House Bill 2779 has been introduced in the legislature. Among other things, the legislation would require:

A new study reveals that Washington State’s housing construction fell far below demand between 2000 and 2015 and Willamette week reports that the state agency responsible for regulating and supervising low-income housing providers is failing to enforce policies against rent gouging at affordable housing complexes.

KATU News: Commissioner Eudaly on Why She's Running for Reelection

KATU news interviewed Portland City Council member Chloe Eudaly on Sunday regarding why she is running for re-election, and what she hopes to accomplish if she is successful. In the interview, Eudaly highlighted housing as her top priority - she hopes to do more work on tenant protections and providing opportunities for home ownership. She also emphasized the need for a stable funding stream for the city's housing programs, and cited the relocation ordinance as her biggest achievement so far. KATU's Lincoln Graves asked Commissioner Eudaly about the city's commission form of government, and whether she would be open to a change. Eudaly acknowledged that the form of government is outdated, but stated that she does not know what form of government would better serve city residents. Watch video.
Posted by Jennifer Shuch at Monday, January 27, 2020 No comments:
Labels: #2020, #citycouncil, #election, #landlordandenantlaws, #oregon, #Portland
Location: Portland, Ore. Portland, OR, USA

State Senator Shemia Fagan is proposing new legislation with Oregon Labor Commissioner Val Hoyle that would allocate $299,000 to hire a prosecutor and four staff members charged with investigating complaints of housing discrimination and educating landlords on housing laws. According to Hoyle, the legislation would allow Oregon to re-join a partnership with the US Department of Housing and Urban Development, which ended in 2015. Read more.
Posted by Jennifer Shuch at Thursday, January 23, 2020 No comments:
Labels: #fairhousing, #landlordandenantlaws, #legislature, #oregon, #Portland, #salem
Location: Portland, Ore. Portland, OR, USA

Two bills in the Washington Legislature - HB 2780 and SB 6536 - would re-legalize small plex buildings in single family neighborhoods. Oregon passed similar legislation (HB 2001) last year, effectively eliminating single family zoning statewide. The proposals in Washington would allow triplexes on any lot, and up to six-plexes on some lots in single family zones in cities with 15,000 residents or more. For cities with 10,000-15,000 residents, duplexes would be allowed on single family lots. Read more.
Posted by Jennifer Shuch at Thursday, January 23, 2020 No comments:
Labels: #development, #multifamily, #washington, #zoning
Location: Portland, Ore. Portland, OR, USA

ECONorthwest & Up For Growth: Washington State Underbuilt by 225,000 Housing Units

In a study released this month, ECONorthwest and Up for Growth reported that Washington State underbuilt by 225,000 housing units, which contributed to the current housing crisis. Read the full report here.

Report: Rents Climbed in 2019 but Oregon Rents are Below the National Average

A new report by Rent Cafe showed that rent in Oregon cities is lower than the national average.

Joe Cortright at the City Observatory blog published an exhaustive list of gentrification scapegoats, including links to sources where these supposed causes have been linked to gentriciation. While Cortright argues that the true cause of gentrification is a shortage of urban areas where people want to live, his alphabetized list highlights the various issues that have become intertwined with gentrification in the popular imagination. Among these are artists, linear parks, coffee, free little libraries, children, and bikes. Read more.
Posted by Jennifer Shuch at Tuesday, January 21, 2020 No comments:
Labels: #gentrification, #oregon, #Portland
Location: Portland, Ore. Portland, OR, USA

RentCafe released its year end rent report for Oregon, which highlights the change in rents during the month of December. Eugene, Salem, and Albany saw the highest rent increases month over month – while Eugene rents increased 1.2%, Salem and Albany’s increased by 1%. Bend also saw strong rent increases, at 0.8%, and Oregon City saw the highest rent increases in the Portland metro area at 0.4%. A large number of Oregon cities saw rents decrease in December – Hillsboro had the largest rent decrease at 0.5%. Gresham, Happy Valley, Lake Oswego, Milwaukie, Portland, and Tualatin all saw rent decreases of 0.3%. Despite the slight decrease in rents, Lake Oswego remains the most expensive city in the state for renters – the average rent there is $1,680. Year over year, Portland rents increased by 3.3%, bringing the average rent in the city to $1,535. Tualatin saw the highest yearly increase in rents at 6.8%. Nationwide, rents were up 3% in 2019 but ticked down 0.1% in December. Read more.

Portland Mayoral candidate Sarah Iannarone released a housing platform she calls Housing for All, in which she calls for a "collaborative, community-based approach to housing." She argues that solving the housing crisis is an important part of solving the housing crisis, and advocates for a wider variety of housing options throughout the city. Her housing policy agenda includes:

The Wall Street Journal criticizes Oregon’s housing shortage as a state and local government failure; The Portland Design Commission strikes language from a code revision that would have required developers to provide outdoor camping space; a report details how Findland has become the only country in Europe with a declining homeless population.

In the past decade, Oregon’s economy boomed while the production of housing reached record low levels; a California newspaper investigates how France is working to fix the Paris housing crisis, where underbuilding created a housing shortage.

WSJ Editorial Board: Oregon's Housing Shortage Is a Policy Failure

The Wall Street Journal's editorial board published a profile of Oregon's housing shortage on Sunday, based on analysis conducted by State Economist Josh Lehner. Between 2010 and 2019, the state added 400,000 new residents, but permitted only 37 housing units per 100 new residents. The Journal blames the state's urban growth boundaries, which limit sprawl, for the lack of building, as well as policies like inclusionary zoning, which has curtailed the construction of buildings over 20 units in Portland. They cite a report by Up for Growth, which found that Portland's IZ policy is "diminishing the supply of housing at nearly all income levels." Read more.
Posted by Jennifer Shuch at Monday, January 06, 2020 No comments:
Labels: #housingpolicy, #housingshortage, #inclusionaryzoning, #oregon, #Portland, #urbangrowthboundary
Location: Portland, Ore. Portland, OR, USA 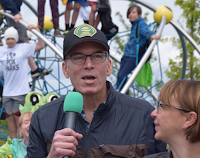 Portland Commissioner Nick Fish died Thursday, just two days after he issued an announcement that he would be resigning his position due to health issues in 2020. His term was originally slated to end in 2022, but in a letter he addressed to his constituents last Tuesday, he indicated that he planned to serve only until a successor could be elected later this year. Commissioner Fish continued to serve on the city council despite an ongoing battle with stomach cancer for the past two years, and took most of December off due to health reasons. He won his first term in a special election in 2008, and is credited with helping to create the Portland Housing Bureau in 2009. He most recently oversaw the Bureau of Environmental Services and Portland Parks and Recreation. Prior to joining the City Council, he practiced labor law. He moved to Portland from New York in the late 90s when his wife, Patricia, took a job at PSU. The city charter calls for a special election within 90 days of a City Council vacancy unless there is a reason for delay, but according to the Oregonian an election could occur simultaneously with the primary elections on May 19th. 4 of 5 City Council seats will now be up for grabs this year. Both Mayor Wheeler and Commissioner Eudaly are up for re-election, and Amanda Fritz announced in 2019 that she plans to retire rather than run for another term. Read more.