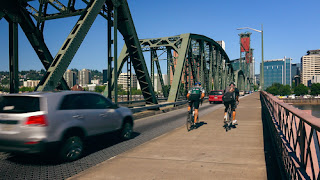 For the third year in a row, Oregon is the top state for inbound moves, according to United Van Lines. The company’s research indicates Oregon is attracting millennials and retirees “…and it’s easy to see why. Industries like creative design and technology are booming, and places like Portland and Eugene have plenty for residents to enjoy.”

“This year’s data reflects longer-term trends of people moving to the Pacific West, where cities such as Portland and Seattle are seeing the combination of a boom in the technology and creative marketing industry, as well as a growing ‘want’ for outdoor activity and green space,” said Michael Stoll, economist, professor and chair of the Department of Public Policy at the University of California, Los Angeles. “In the past, you could clearly see the job-related reasoning. This year, people are moving for social reasons rather than economic reasons.”

The company reports that just as 2014, those moving to the Beaver state were drawn to “high walkability scores, affordable housing and beautiful green space.” That those retiring in Oregon found the cost of living relatively low compared to their prior home states.

Portland continues to attract Millennials with dreams of entrepreneurship and profit in a growing technology arena.