The Seattle Daily Journal of Commerce reports that the "Base Capitol Hill" microunits, which range in size from 120-235 SF and rent for $800-$1,000 per month, have been named a finalist in the Jack Kemp Excellence in Affordable and Workforce Housing Award from the Urban Land Institute. Read more.
Posted by HFO Investment Real Estate at Thursday, October 29, 2015 No comments:
Email ThisBlogThis!Share to TwitterShare to FacebookShare to Pinterest
Labels: #affordablehousing, #seattle, #Seattleapartments, affordable housing, microunits, new apartment construction, seattle apartment market
Location: Portland, Ore. Seattle, WA, USA 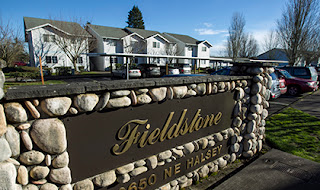 The Fairview apartments sold for $20,800,000. The owner had worked with HFO in the past and decided to re-engage the firm for the sale of their property due to the current state of the market and HFO’s specialized focus on multifamily dispositions.

HFO’s collaborative and strategic approach generated offers from 13 pre-qualified investors, enabling the client to close the transaction with a satisfied buyer out of California and setting a record price per square foot for the Fairview market.
Posted by HFO Investment Real Estate at Wednesday, October 28, 2015 No comments:
Email ThisBlogThis!Share to TwitterShare to FacebookShare to Pinterest
Labels: #apartmentsales, #multifamily, Gresham, Sold Listing, transactions
Location: Portland, Ore. Fairview, OR, USA 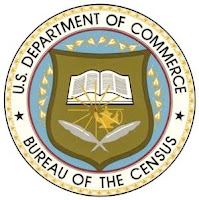 In every survey over the past two years, Portland metro has ranked consistently among the nation's lowest vacancy rates. In this latest Census Bureau Report, Portland metro is tied for 24th lowest with Hartford-West Hartford-East Hartford, CT

Seattle-Tacoma-Bellevue was in a 2-way tie with San Diego for 4th place with vacancies at 2.0%, down from 4% the prior quarter.

The nation's lowest vacancy rates were as follows:
The average national rental vacancy rate for Q3 2015 was 7.3 percent for multifamily dwellings of five or more units, and was 0.1 percent lower than a year earlier. The U.S. rental vacancy rate has been falling since 2009. It is at its lowest level since 1993 and far below the 11 percent average vacancy rate of 2009.

Although rents in the West and specifically Portland metro lead the nation, average rents remained flat.

Homeownership rates in the Western U.S. increased slightly from 58.5 to 58.7 percent, near its 24-year low.

[Note: The US Census vacancy estimate is 2.23% higher than the vacancy rate of 2.87% reported by MultifamilyNW in its Fall, 2015 Apartment Report.]

MPF Research reports on the latest quarterly results which put Portland and the rest of the west on the rent growth leaderboard. 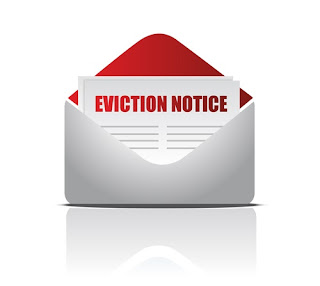 On Wednesday, landlords were only required to provide tenants one month's notice for rent increases in the City of Portland. That has changed.

The Portland City Council voted yesterday to require landlords to provide 90-day notice for no-fault evictions, and for rent increases of more than 5 percent.

The council also proposed a $25,000 tax on home demolitions.

Detailed Breakdown of Survey Results for Vacancies and Rents for Oregon, SW Washington

According to the fall 2015 MultifamilyNW Apartment Report, vacancies in cities and neighborhoods stood at rates varying from 1.4% to 3.7%. Rents per square foot increased at an overall average rate of 9%. 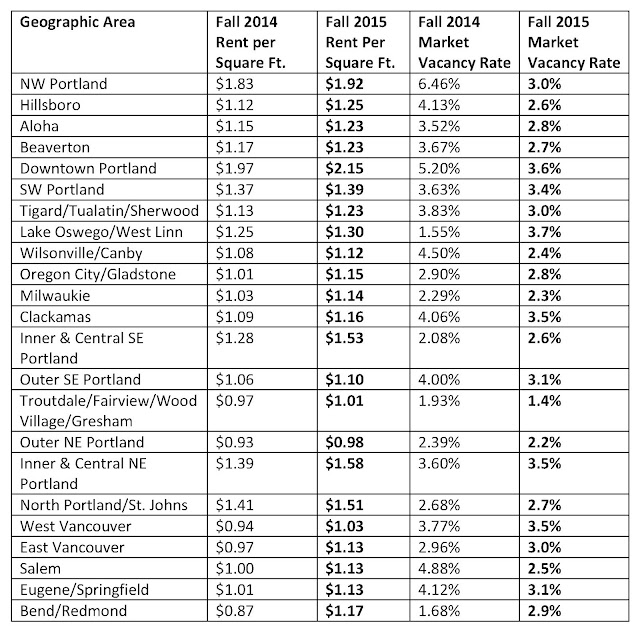 According to Kafoury, the county is working in partnership with City of Portland to provide $5 million of those funds.
Posted by HFO Investment Real Estate at Wednesday, October 14, 2015 No comments:
Email ThisBlogThis!Share to TwitterShare to FacebookShare to Pinterest
Labels: #affordablehousing, affordable housing, City of Portland, multnomah county
Location: Portland, Ore. Portland, OR, USA

In its Apartment Market Report released this morning, MultifamilyNW relorts the fall 2015 rent and vacancy rates as follows:
Portland/Vancouver vacancy factor declined to 2.8%.
Portland/Vancouver rent rates have increased at an annual rate of 9%.
Apartment lobbyist Gwenn Baldwin indicated the Portland City Council is expected to approve a 90-day rent increase notice requirement at its meeting today. If approved, the rule would take effect November 13th.
Posted by HFO Investment Real Estate at Wednesday, October 14, 2015 No comments:
Email ThisBlogThis!Share to TwitterShare to FacebookShare to Pinterest 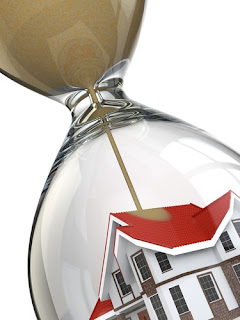 The Portland City Council approved a housing emergency plan on Wednesday, which enables leaders to bypass city codes to allow temporary emergency homeless shelters, to open day-storage areas, and to use city properties to address a growing crisis.

The City Council also held a public hearing Wednesday on proposed rules to strengthen renters' rights. One proposal included to require landlords to give tenants 90 days' notice, opposed to 30 or 60 depending on longevity, for no-cause evictions.

Read the full story on Oregonlive.com.

Stating that the area has enough available land to accommodate the next 20 years of growth, Metro will not expand the Urban Growth Boundary, according to Metro President Tom Hughes.

Metro released a draft report in 2014 that said capacity already existed to provide housing for another 400,000 people as long as about 123,000 mostly multifamily units are built.

On HFO-TV: The Latest Economic Update for the Clark County/Vancouver Area