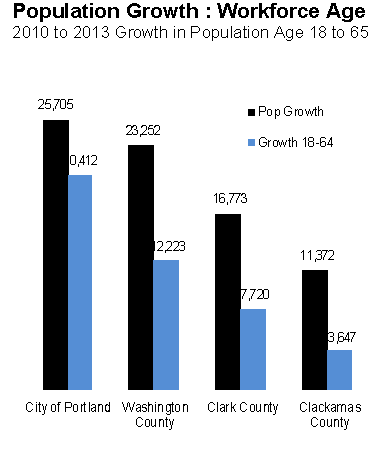 Every county in the Portland metro region has seen an increase in the number of residents who are working since 2010. The City of Portland stands out with relatively faster growth in the working population. This suggests residents of the City of Portland are recovering from the recession relatively faster, though these workers may commute outside the city for their jobs. Multnomah County is showing some of the strongest growth in the region with 11,100 new jobs over the last 12 months, significantly more than Washington County (+2,600) and Clackamas County (+1,300) combined. 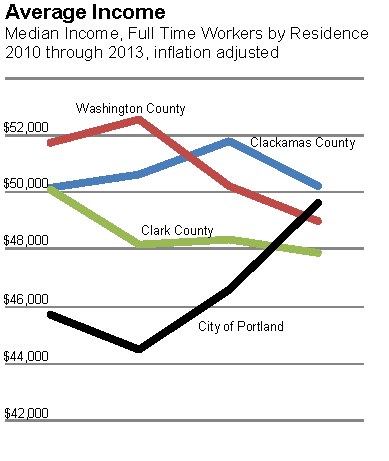 As the region attracts new jobs and workers, a question naturally arises: Do the new jobs pay well?  In Clackamas County, wages (adjusted for inflation) for residents working full time are unchanged at about $50,000 a year since the 2010 recession. Workers living in Washington and Clark County have seen a noticeable decline in real wages. Conversely, wages for workers living in Portland have increased strongly in the economic recovery.
Posted by HFO Investment Real Estate at Thursday, October 09, 2014
Labels: #multifamily #Portland, economy, employment growth, population growth, Portland employment