Home Ownership Rate at Lowest Since 1995 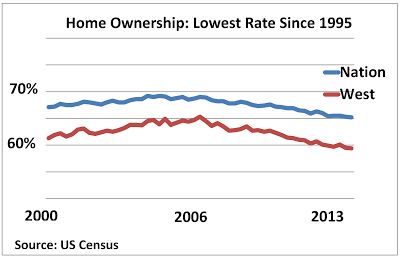 The share of Americans who own their homes is at the lowest level since Q3 1995, standing at 65 percent. Home ownership is lowest in the western states, at 59.4 percent.  Economists predict home ownership levels could drop another 1-2 full points over the next three years considering 10 million Americans still owe more on their mortgages than their properties are worth.  In his 2012 book The Age of Deleveraging economist Gary Shilling predicted an additional 780,000 new renters each year in the U.S. through 2016 as home ownership rates continue falling.
Posted by HFO Investment Real Estate at Monday, June 24, 2013 No comments: Links to this post
Email ThisBlogThis!Share to TwitterShare to FacebookShare to Pinterest

An article published in today's Oregonian summarizes a 95-page study recently completed by the City of Portland identifying neighborhoods next "at risk" for gentrification.  The study identifies potential methods for minimizing disruption for existing residents.  The Oregonian also provided an interesting interactive map.
Posted by HFO Investment Real Estate at Sunday, June 23, 2013 No comments: Links to this post
Email ThisBlogThis!Share to TwitterShare to FacebookShare to Pinterest

According to a report released this month by the Oregon Economic Forum, Oregon's economic Indicators continue improving:
Download a PDF of the full report here.
Posted by HFO Investment Real Estate at Thursday, June 13, 2013 No comments: Links to this post
Email ThisBlogThis!Share to TwitterShare to FacebookShare to Pinterest

The PSU Center for Real Estate has released its quarterly real estate report. The report contains the news that high demand for rentals is expected to persist over the next several years.  Axiometrics, a leading provider of apartment data and market research, reports effective rent growth remained steady in February at a rate of 3.53 percent.  "...effective rent growth for Class A properties has really slowed down," said Ron Johnsey, president of Axiometrics. "Class B rates have remained relatively steady, but Class C rates have continued to increase," he said.  Click here to download the PDF of the apartment market analysis. For the complete analysis on industrial, retail and office properties, read the full report.
Posted by HFO Investment Real Estate at Thursday, June 06, 2013 No comments: Links to this post
Email ThisBlogThis!Share to TwitterShare to FacebookShare to Pinterest 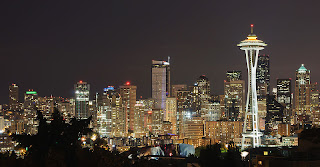 MPF Research reports that rents in Seattle/Tacoma jumped 2.0% in the first quarter of 2013 for an annual rent growth rate of 4.2%. The rate is impressive compared to other metros.